Back to Holland, back to Harry Mülisch

Harry Mülisch (1927 – 2010) was a well-known Dutch author. Together with Gerard Reve and W.F. Hermans, he belonged to the ‘big three’. The big three were the most prominent of Dutch writers after World War II (although Harry Mülisch preferred to call himself ‘the big one’). Mülisch was not just well-known for his books, but perhaps even more for his massive ego, self-promoting behavior and outward appearance (he was an iconic pipe smoker and wearer of cravats). Carly Simon never disclosed the subject of her song ‘You’re so vain’; it is quite possible for Dutch people to imagine that the subject of her song is actually Harry Mülisch.

These themes include the complex relationship between his parents (including their divorce when he was still a child), the second World War (his Austrian father collaborated with the Germans, partly to protect his mother who was Jewish), the relation with his fellow-authors, and the process preceding the writing of some of his most important books.

Harry Mülisch started his career as a writer in 1952 with the novel ‘Archibald Strohalm’. Famous other books are ‘The Stone Bridal Bed’ (a novel about the bombing of Dresden by the Allies in World War II), ‘Criminal case 40/61’ (a report of the trial of Nazi war criminal Adolf Eichmann in Jerusalem in 1961) and ‘The assault’ (a novel which deals with the assault of on a quisling and its aftermath).

The life of Harry Mülisch as a public figure went through three stages. In the first part of his life he was a self-centered narcissist. When socialism became en vogue in the 1960’s he became a socialist and in the last stage of his life he became a hedonist.

He was a true socialite, he had close friends who were influential in the Dutch world of politics, broadcasting and the arts. He established ‘de Herenclub’ (the Gentleman’s Club), a closed society with members he handpicked and described as belonging to the ‘dignified left’. This (men only) club met on a weekly basis in ‘Le Garage’ , a fashionable restaurant in Amsterdam. Despite his left wing affiliation, he was also extremely proud of his relationship with the Dutch Royal Family. Robbert Ammerlaan’s book contains a detailed description of a private dinner with Prince Claus (including the fact that he was served by a valet and lobster was part of the menu), as well as an encounter with Queen Beatrix, of which Mülisch proudly remarks that she invited him to sit next to her.

Besides ‘armchair socialism’, Harry Mülisch had at least three other things in common with the famous French philosopher Jean-Paul Sartre: writing, smoking a pipe and promiscuous behavior. Mülisch’s reputation of a Don Juan was even mentioned in an article by the International Herald Tribune. Reading about his relationship with women, one gets the impression that women were for him more appliances, than human beings that needed to be treated with respect. Sjoerdje Woudenberg, his first wife, told Robbert Ammerlaan: ‘Harry wanted a 19th century woman […] He was incapable to have a real loving relationship on the basis of of equality’.

All in all, this begs the question why, despite his arrogance, elitist behavior and views on women, he became and remained the darling of the left elite in the Netherlands.

I never really was a fan of Harry Mülisch’s books myself. I liked ‘The Assault’, but did not think too much of ‘Two women’ or ‘The last call’. I found the ‘The stone bridal bed’ boring and the language unnecessary coarse. I also need to confess that I only read two pages so far in my copy of ‘The discovery of heaven’ .

I do however highly recommend ‘Zijn eigen land’ by Robbert Ammerlaan. It is a beautiful hardcover edition and a must have for people who are interested in Dutch literature. It includes unique photos of Mülisch, his family and friends, as well as pictures of his notes (facsimiles) and other objects in his study. 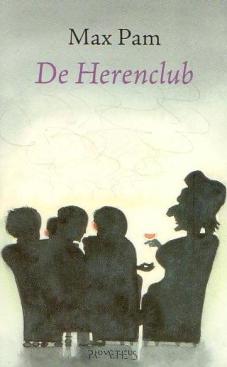 This brings me to the second book about Harry Mülisch, namely ‘De Herenclub’ (the Gentleman’s Club) by Max Pam (1946), a Dutch journalist, chess player and author. The book is a roman à clef about Mülisch’s Gentleman’s Club, with hilarious descriptions of the (pretentious) behavior of the members of this club. Dutch readers will have no trouble deciphering the pseudonyms of the politicians, authors and other authors that are mentioned in this book (writer Horus Mirmir is for instance a personification of Harry Mülisch). It is a wonderful portrait about the life and times of the ‘dignified left’ elite in the Netherland in the 1980’s. I highly recommend reading this book to anyone interested in the Dutch cultural society around that time.

Note: All Mülisch’s books where no Dutch titles are mentioned in this blog post, have been translated in the English language.